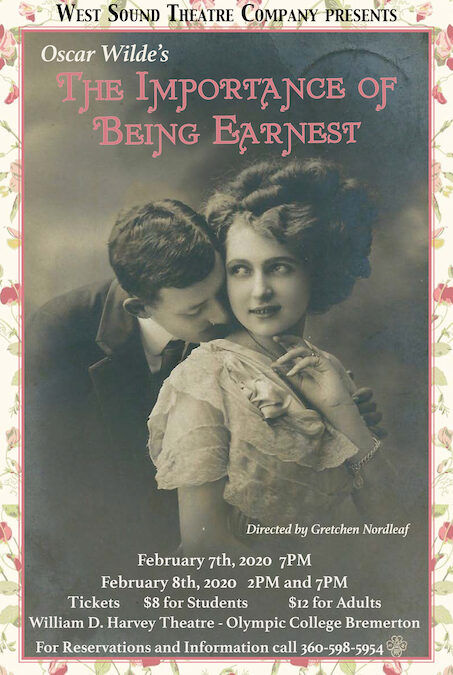 Oscar Wilde’s wildly entertaining comedy sparkles with dazzling wordplay and hilariously unlikely situations. This “trivial comedy for serious people” features two carefree bachelors, Jack and Algernon, each with a carefully hidden double life. But when Algernon discovers that Jack has been posing as a man named Ernest to escape to the city, he promptly travels to Jack’s country estate to pose as the fictional figure himself! Silliness ensues with whimsical ingénues, jealous fiancées, indomitable dowagers, and the most famous handbag in theatre history.

“This will be the first time West Sound Theatre Company has produced one of the world’s classics, and this splendid and hilarious production of The Importance of Being Earnest continues this theatre’s legacy of excellence in high school theatre,” said Gretchen Nordleaf, Director.  With this production we have gathered an outstanding cast from our Upper School Thespians and we promise a beguiling and wild night of Wilde.”

Oscar Wilde (Playwright, 1854–1900) was born in Dublin, Ireland, and attended University of Oxford, where he proved to be a brilliant scholar, winning the Newdigate Prize for his poem “Ravenna.” His first collection, Poems, was published in 1881. His only novel, The Picture of Dorian Gray, was published in 1890 and was widely condemned by Victorian critics for its “immoral” content, but it remains one of his most acclaimed works. In the subsequent years, Mr. Wilde had enormous success on stage with his comedies Lady Windermere’s Fan (1892), A Woman of No Importance (1893), An Ideal Husband (1895), and The Importance of Being Earnest (1895). His play Salome (1893), written in French, was refused a license in London but, thirteen years later, was adapted by Richard Strauss into a successful opera. The Marquess of Queensberry strongly disapproved of the playwright, and a quarrel ensued that eventually led to Mr. Wilde’s imprisonment for homosexuality. He was sentenced to two years hard labor and was released in 1897. He moved to France under the name Sebastian Melmoth and, while there, wrote his famous poem “The Ballad of Reading Gaol.” He died in exile in 1900.