Home » News » What is Knowledge Bowl, and is it fun?

What is Knowledge Bowl, and is it fun? 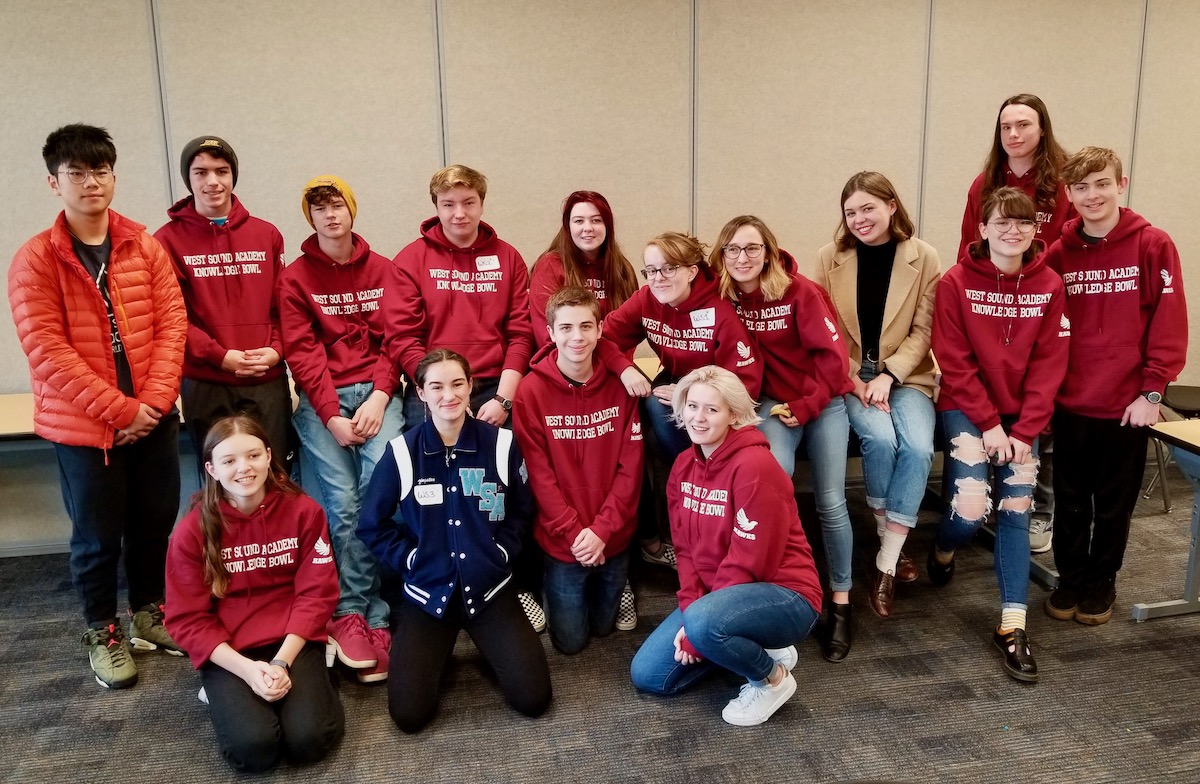 West Sound Academy has a Knowledge Bowl team that holds practices twice a week.  The goal of these practices is to help the team get ready for the three regional competitions organized each year by the Olympic ESD. What is Knowledge Bowl?  What exactly is our WSA team practicing to do? Knowledge Bowl is kind of like Jeopardy played as a team, only answers are given in the form of an answer and not in the form of a question!  In Washington State, public, private, and parochial high schools have Knowledge Bowl teams made up of smaller teams, or squads, generally from 4 to 6 members.  Our school’s four teams played at a practice competition at North Mason High School on December 2, competing against teams from schools from the Kitsap and Olympic Peninsulas.  Questions at Knowledge Bowl competitions cover all topics that could possibly be included in a high school curriculum, plus a few more.  Students need to quickly recall everything they know on math, science, geography, history, literature, visual and performing arts, music, etc. Is it fun?  In a word, yes!

The Olympic ESD regional competitions for Knowledge Bowl have one written round (50 multiple-choice questions to be answered in 35 minutes) and four oral rounds, each with 50 short-answer questions. The goal in each round is to see which team can answer the most of these questions – some are relatively easy, but some are really hard!  The December 2 meet-up was a practice competition for all the teams in attendance; no trophies or awards were on the line. Each team did their best to answer the 250 questions posed to them that day.

Every week since September, our Knowledge Bowl team has been practicing answering questions like those given at the regional competitions.  They use the school’s buzzer bars and a special timer designed for academic teams.  That time spent buzzing in and puzzling over questions at practice paid off at the December 2 competition.  WSA’s teams spent the day going through all five rounds and facing some fierce competitors from other schools in our region.  WSA’s top squad, WS1, had the highest final score out of the thirty teams playing that day.  Members of WS1 are seniors Emily Bradford (captain), Max Metters, and Aidan Phelan, and junior Emma Longworth-Slone.  Congratulations to the entire WSA Knowledge Bowl team, and good luck at the next competition on January 15 at Fort Worden!